RUDE girl has just discovered there are not many quotes about turbans.  I could not find a quote for this post.  Therefore I will make my own quote.

I picked up an old beach towel from the point of landfill the other day.  It was a bit worn but still had lots of wear.  I have a huge pile of secondhand beach towels, therefore I decided to cut this towel up for turbans to wear after shampooing my hair.

I do not mind using secondhand towels because its the same thing as using towels in a motel or staying overnight at a friend’s house.  All I did with this towel is soak it for 24 hours, wash it and hang it out to dry in the sunshine. 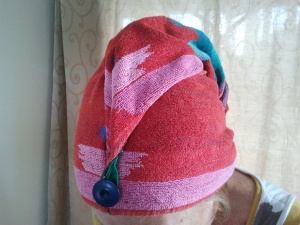 Photos above:  The same handmade turban from three different angles

After cutting out the shapes all that was required was to over lock stitch the crown shaped areas.  Add buttons and loops and voila.  Turban time!

Photo below:  My turban has pride of place between two secondhand towels also rescued from landfill years ago.  Just by chance the colours actually match! 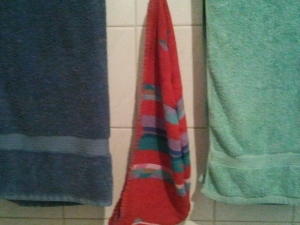 Beat The Man and embrace frugal turban fashion!  And a fact, secondhand towels are oftentimes more absorbent than new towels.

For me, clothes are kind of character; I don’t follow fashion or understand trends.  Meryl Streep

“Cultivate a relationship with your clothing, an investment that directly connects the grower with the maker and the wearer. Repair is an extension of that sentiment, and a deepening of the relationship through wear, and repair, and the honoring of all the embedded stories that led to it.” REWARDROBE Eco Fashion Talk by Sass Brown

Photo below:  RUDE Girl revived this 1980s frock in under an hour for no cost.  It’s what I term a house dress, and I love it to bits because it reflects my mission to always mend and make new.

For RUDE Girl there is probably no better feeling that RE-vamping a fast fashion garment.  Why?  Because it is a radical gesture.  Many people would not bother to take the time to fix a rag.  And most fast fashion after it is worn and washed a few times, is only good for the rag-bag.

Yesterday, I revived this 1980s rayon frock in the above photo, which I consider to be fast fashion for its time.  The tag had been removed, and the edges had been over locked stitched.  It was probably a little bit better quality than a current cheap fast fashion dress.  Why?  It is rayon not polyester, and has some bust darts to give the bodice shape.

This maxi frock was discovered in a huge pile of clothes at a community garment swap at a local sustainability festival. It was missing a button and had a split up each side.  Both splits had ripped further up the side seams.  The over locking stitch had come away in parts, and there were three tiny holes in the fabric at the front of the dress.  Most people, I believe, would have considered it a rag.  Even the sorting ladies at the local charity shop would have ditched it!

But the frock spoke to me of opportunities for comfortable days around the house. I liked its A line shift style.  I could wear a vintage petticoat under it and in cooler weather a long-sleeved top.  A perfect old dress that sort of reminded me of a dress style from the 1920s and 1960s.

Photo above: The front skirt piece had three small holes which I covered with crocheted circles from old doilies.

Photo above:  The bodice required reinforced over locking under the bust line. As were the side and centre back seams

Photo above:  The hem was shortened from maxi to knee-length and a cotton lace attached to the over locked hem edge.

Beat The Man and revive a ragged frock to good as new, if not better than new fast fashion!

Really, what are the options? Levi’s or Wranglers. And you just pick one. It’s one of those life choices.

RUDE’S scavenger style represents our political and economical fashion statement against throwaway fast fashion.  We have not purchased new clothes for decades.  And what we have been wearing for the past five years is mostly all sourced from the point prior to landfill.  We seek out and rescue a couple of items, once a fortnight, from the piles of garments at the local Tip Shed, adjacent to the local recycling transfer station.

Photo below:  Garments and textiles at the City of Melton’s Tip Shop in Melbourne, Australia.  Most of these items will not even be downcycled, and will end up in landfill.  Amongst these piles of clothes are denim jeans that are worn and torn. 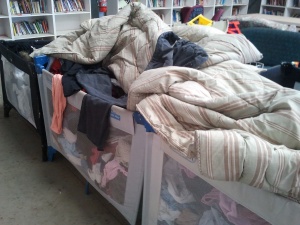 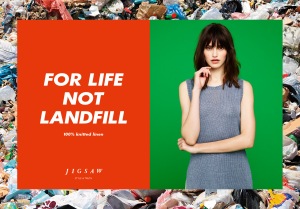 At the moment, RUDE cannot help feeling a bit smug because Jigsaw clothing brand has just released its For Life Not Landfill campaign. [photo above]   It’s validation for us that our scavenger style’s political and economic fashion statement is leading the way!  How utterly awesome is that thought for us, even if nobody else acknowledges it, we too are leaders in creative ways to advertise landfill textile waste.

RUDE boys red tab Levis as posted here would have been considered by many to be ready for the rag-bag.  And would not have looked out-of-place amongst the clothes found in these cots above.

Mending using the Japanese technique of reinforcing fabric with more fabric and running stitches, has ensured that Danny will be wearing his loved Levis for another 15 years!  Danny’s legs will be strutting and showcasing sashiko scavenger style.  How awesome is that!

We did Twitter the Levi company this good news but it has not replied.

Thank you Dave Towbridge from California in the USA for your comment on Google+ in relation to the above photo as follows:

This is something Friends could certainly get behind. A beautiful example of how the Testimony of Simplicity does not require wearing ugly or uninteresting clothing.

Beat The Man and keep textiles out of landfill!  And like RUDE and Jigsaw advertise your efforts.

“Talent and individual expression are not qualities that just other people possess. You have it too! All of you have a capacity for creativity in your quilting. Let yours happen and realize there are no boundaries to your unique expression.” Anon

RUDE Girl is inspired by the above anonymous quote.  I am not a traditional ‘rule following’ quilter, and do not want to be known as such.  My scavenger style quilt or wagga making reflects the ‘waste not, want not’ or making do tradition. This is evident  where I use recycled woollen fabric rescued from landfill to make my daughter a lap wagga for the football or the car.

I have no quilting skills other than those I have taught myself intuitively or from books.  And from asking talented traditional quilters some questions, and then once knowing the rules, setting out to break them.  Why?  When you work with new fabric and resources it is essential to follow good practice for the obvious reason that mistakes can be costly.  It is my opinion, that when you work with recycled fabrics, and other resources like RUDE does, the beauty lies in imperfections, and the lack of attention to traditional quilt making rules.  And therefore you do not have to be as focussed on making costly mistakes.

Photo below:  RUDE’S acronym is REuse of Unloved Discarded Excess.  The old blackboard is evidence that RUDE REuses stuff.  Even the chalk is secondhand!

A wagga was a bush rug made from scrap wool.  And this is my next quilt making project for the cooler Melbourne months ahead.  I attended a workshop on wagga making and wool dying October 2014.  I was able to eco dye the wool blanket patches provided at the course.  However, I never did get around to making up the wagga.  In the meantime I was given more woollen patches from a woman who had attended the course but was not keen to sew a wagga [thank you Sue for thinking of me!]

These patches came from numerous charity shops via the wagga and dye workshop.  The workshop’s textile artist Robina,  informed me that each blanket cost between $8-$12.  And that she had been all over the place over several months collecting them.  This labour of love, and with the actual total cost of the blankets, and then hidden costs like petrol and time, it is imperative that I create a tribute to all the people who have touched the parts of the blankets that I now have in my keep.

Photo below: 13″ square patches from woollen blankets that have been eco dyed. 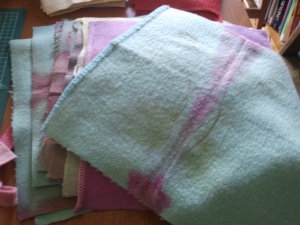 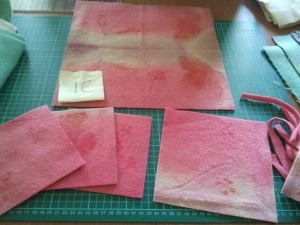 Over the past six months I have also been collecting any woollen blankets that I come across.  I will not pay anymore than $4, and oftentimes hope to get them for $1-$2.  Usually they are in reasonable condition but are torn or stained which is perfect for patchwork, as you just cut around these areas.

Photo below:  A piece from a woollen single bed blanket purchased for $4 from a charity shop in Leongatha.  After felting it shrivelled up in certain parts. 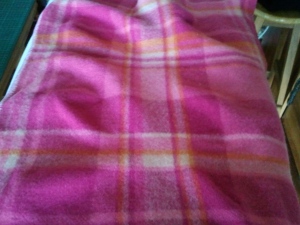 Photo above:  The piece of the blanket that shrivelled has been pressed and squares cut ready for use.

Australian waggas were used throughout the 19th and early 20th centuries, mainly in the rural areas.  Very utilitarian in purpose being used for camping, holiday shacks, in general, and where extra bedding was sought for guests.

As described in The Gentle Arts by Jennifer Isaacs 1987,  generally waggas included some kind of sacking material, either corn sacks, wheat sacks or flour sacks.  These were opened, the stitching removed and they were sewn together inside other covers.  Extra wool would be added. often in the form of old clothing stitched together; this was then covered with blankets or some kind of fabric such a cretonne.

Photo above:  RUDE’s very own book The Gentle Arts 1987 purchased from the local tip shop for 50 cents .

Being a recycling radical, I do hope to showcase this wagga along the way and when it’s completed, as testimony to simplicity and frugality in times of rampant consumerism.  That RUDE’S future generations may keep and hand down this wagga, as evidence that RUDE was radical for their time.  That RUDE was not of the mainstream will definitely be reflected in this wagga.

Here is an example of a historical wagga with its story.

Beat The Man, be radical and make a wagga wagga!